Joshua lands employment as an apprentice in landscaping and civil construction

Joshua, aged 17, has had success in the Transition to Work (TtW) program, working with Anglicare SA in Christies Beach in Adelaide’s south.

Prior to voluntarily joining the TtW program, Joshua was not eligible for income support payments and had been disengaged from education and work for more than 6 months.  He had just lost his learners drivers licence, decreasing his motivation and making the job search harder.

Joshua quickly moved through Phase 1 Activities and received one on one coaching.  Joshua identified that he wanted to work in a trade, doing something practical in an outdoor environment. His participation in experiential learning sessions solidified his decision to seek an apprenticeship in the outdoors.

Enthusiastically, Joshua approached his coach with a job that he really wanted to apply and was assisted through the application process. Joshua was encouraged to reach out to the employer directly and after doing so, was asked in for an interview. He received interview technique coaching, focusing on appropriate language and how to dress for the opportunity.

Joshua landed the job! He is now employed has an apprentice with Outside Ideas, a landscape and civil construction company. Joshua is incredibly happy with his new role and is on track to being a fully qualified tradesman.  Through identifying and following his dreams with support of the TtW team, Joshua feels empowered and has increased his independence.  He is working alongside new friends in an industry he loves. 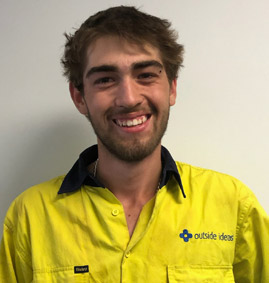